Two young Rome men, Austin Eugene Dean, 19, and Joshua Levi Cohley, 20, were arrested this week after an incident that saw both men drunk and doing donuts in the yard of a home on Payne Road.

Reports stated that Dean, a passenger in a vehicle, was seen hanging out a window yelling profane and curse words damaging the yard.  Reports said that when police arrived, the driver Joshua Levi Cohley, appeared drunk while also yelling profane and vulgar words.

Dean is accused of charging at officers, placing them in fear of their safety. 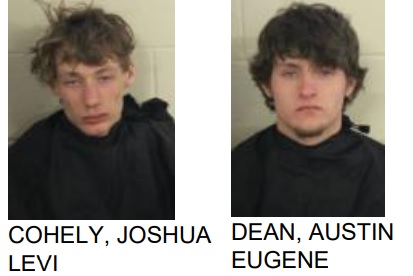 Two people have been arrested in connection with the theft of various items from a storage unit on Martha Berry Highway back on December 28.

Both Garlin and Cordle are charged with 2nd-degree burglary and theft by taking.

Police are asking for public help in identifying a suspect who robbed the A1 Food & Beverage on January 15th.

According to Floyd County Police, the suspect fell hard running away, and was picked up by a dark color car on a nearby street.

If you have any information regarding this suspect, please contact Floyd County Police Sgt. Jordan Clayton at 706-314-1861.

Jason Barkley, 55, was killed when the vehicle he was driving spun out into a ditch around 6:30 a.m. Baker said they believe Barkley hit a patch of ice which caused him to spin out.

Officials ruled the crash as an accident and there will not be any further investigation.

We are having electrical issues at the tag office. All computers are down with the exception of one window. I hope to have it fixed soon, but in the meantime we will be processing very slow. Please bear with us!

It takes a lot of connections and outlets to run all of our equipment. I’m afraid our office just gets overloaded at times since it was designed before everything was electronic. This happens a few times a year, but this time is on a larger scale, taking out more than half of our working abilities.
From the Walker County Sheriff’s Facebook page:
Missing Person—
Mathew Dunn age 16 was last seen Friday January 7,2022 at his residence in Chickamauga GA. If you know the whereabouts of Mathew please contact Detective Becky Beason 706-638-1909 ext 1253 or email rbeason@walkerso.com- or 706-375-7810