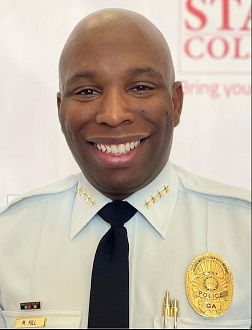 Marcus Hill attended classes on GNTC’s Gordon County Campus in Calhoun and graduated in November 2013 with the Academic (Honor Graduate) Award for the highest academic average in his BLE training class. He is currently the interim chief of police for the Atlanta Metropolitan State College Police Department.

“My career thus far has been one entrenched with adversity, road blocks and broken barriers,” Hill said. “I tend not to focus on awards received or things accomplished because there is still so much more to do.”

Becoming a police officer was always a childhood dream as he grew up in Powder Springs, he said, so he became a Law Enforcement Explorer at age 14 with the Powder Springs Police Department and later with the Hiram Police Department, where he rose to the ranks of chief and lieutenant, respectively; the Law Enforcement Exploring program, also called Police Explorers, allows qualified young adults ages 14-21 to explore law enforcement career opportunities by working with local law enforcement agencies. He also served as captain of the McEachern High School security team while a student, he said.

At 19 he had a young child and another on the way as he attended GNTC’s Law Enforcement Academy during the day and worked a full-time civilian job with the City of Hiram at night. He said GNTC’s program appealed to him as one of only a small handful of programs that would allow a pre-service candidate (not currently sponsored by an agency) to apply under the age of 21.

“I still remember sleeping in my car some nights in the parking lot of the campus on my off nights from the city because I could not afford the gas at times for the frequent trips back and forth from Powder Springs,” he said.

Hill said he began working at his current employer in August 2018. He was promoted to rank of captain (assistant chief of police) on Jan. 1 and on April 1 was named interim chief of police.

He said he credits GNTC’s Law Enforcement Academy with laying the foundation on which everything in his career thus far stands.Since graduating from GNTC,

Hill earned a bachelor’s degree in Criminal Justice from Atlanta Metropolitan State College and is preparing to start working towards his master’s degree in Public Administration through the Columbus State University Command College, he said.

Georgia Northwestern Technical College provides quality workforce education to the citizens of northwest Georgia. Students have the opportunity to earn an associate degree, diploma or a certificate in aviation, business, health, industrial or public service career paths. This past year, 11,134 people benefited from GNTC’s credit and noncredit programs. GNTC has an annual credit enrollment of 8,528 students and an additional enrollment of 2,606 people through adult education, continuing education, business and industry training and Georgia Quick Start. For more information about GNTC, visit us at www.GNTC.edu. GNTC is a unit of the Technical College System of Georgia and an Equal Opportunity Institution.

On Monday morning, May 9, Sheriff’s Office deputies and detectives responded to the scene of a major burglary at a local storage facility near Calhoun. Officers at the scene met with the business owners and determined that over 70 units had been forcibly entered by cutting off padlocks and a large amount of property stolen from within, as well as from commercial vehicles parked within the complex.

Sheriff’s crime scene technicians began gathering physical evidence as victims were contacted to provide information about the stolen property. Detectives immediately recovered video footage from the business’ security camera system which clearly depicted both suspects. Still shots from this video were distributed to local media outlets which led to a large number of ‘tips’ from citizens.

These tips allowed the detectives to identify and locate the suspects, and the majority of the stolen property in Murray County. The two suspects were camping near Grassy Mountain.

One suspect escaped on foot into the wilderness area upon the arrival of deputy sheriffs.

The suspects, in this case, have been identified as

The stolen property was found inside 2 cars near the suspects’ camp, and also at a private residence in Murray County. Detectives are in the process of identifying and returning the property to the rightful owners now.

The investigation has yielded evidence that the pair have been involved in both commercial and residential burglaries in multiple jurisdictions in both Georgia and Tennessee, as well as thefts from State/Federal money ‘drop boxes’ at parks/wilderness areas, which are being investigated by state authorities.

*Anyone with knowledge of PATRICK JAMES CUZZORT  is urged to call 911.

Sheriff Ralston sincerely thanks all of the citizens who provided information to the Sheriff’s Office which facilitated this case being solved, arrests made, and the stolen property has returned to its rightful owners.

A Rossville man is dead and the GBI is investigating the officer involved shooting in Gordon County, Georgia.

Deputies performed a PIT maneuver on Honea’s car that caused it to leave the interstate and go down an embankment. Law officers attempted to take Honea into custody. He reportedly failed to comply with the officers’ commands, making a movement toward his waist… and was shot dead.

The GBI Medical Examiner’s Office will conduct an autopsy. No officers were injured during the incident.

On Thursday, Sheriff’s Detective Kenneth Hollaran received an official commendation from the Federal Bureau of Investigation for his work on a criminal case that he initiated in 2019. The case, which was begun in Gordon County and subsequently adopted by the FBI, involved the large-scale theft of heavy construction equipment by a ring operating out of the Georgia prison system. The ‘scam’ consisted of a prison inmate, Damon Thomas Young, age 39, formerly of a Gordon County address, using contraband cellular telephones and fictitious identities to order heavy equipment (track hoe, front-end loader, etc.) which was then delivered to a third party address in Ranger, Georgia. The actual thefts were in excess of over half a million dollars. In total, Young ordered or attempted to order equipment valued at over 2 million dollars, and even managed to acquire LLC (Limited Liability Corporation) status for his “company” from the prison. Young was convicted of Wire Fraud and Aggravated Identity Theft in the United States District Court in August 2021.

On Thursday, April 14, officials from the Dalton, Georgia FBI Office visited the Sheriff’s Office where Supervisory Special Agent Sean Burke and Special Agent Jamie Harter presented Detective Hollaran with a  certificate from FBI Director Christopher A. Wray praising Hollaran’s  “immeasurable contribution in a joint investigative effort”. Detective Hollaran is a 17-year veteran of the Sheriff’s Office and resides in the Sonoraville community. He was previously decorated by Sheriff Ralston for his work in this case.

At about 1 a.m. this morning, Gordon County Sheriff’s deputies were involved in a high-speed, multi-jurisdictional automobile pursuit on Interstate 75 southbound.

The pursuit ended south of Calhoun when the suspect’s vehicle left the roadway and crashed in a culvert. After the crash, an officer-involved shooting occurred.

No deputies or other peace officers were hurt. Agents from the Georgia Bureau of Investigation (GBI) are on-scene at this time at the request of the Sheriff’s Office and will conduct the investigation.

There are no suspects at large and no danger to the public.

Sheriff Ralston thanks the Calhoun Police, the Georgia State Patrol, and other emergency responders for their assistance in this matter.

More information has been released concerning that helicopter crash on Golden Circle off Highway 53 in Calhoun Tuesday.

According to the incident report from the Calhoun Police Department, the pilot, identified as 69-year-old Ronald Dobbs of Calhoun told officers that he had landed in a grass field and was trying to take off again.

He turned the helicopter 100 degrees in the opposite direction and a gust of wind caused the aircraft to shift.

As it began to lift upward, the propeller struck some power lines and the helicopter spun out of control, striking the Aaron’s Rents building and ending up on its side.

Dobbs was transported to the hospital with minor injuries.

A 34-year-old man and two juveniles, who were passengers on the helicopter, were not injured.

The investigation was turned over to the Federal Aviation Administration.

Motorists were asked to avoid Highway 53 and South Wall Street in Calhoun Tuesday afternoon after a helicopter crashed near El Nopal.

The aircraft is a privately owned helicopter, and four people we onboard, including the pilot.

Everyone on board survived the crash with only minor injuries reported.

Calhoun Police responded to the scene and the FAA is investigating the cause.

According to the Georgia State Patrol, a vehicle driven by Brody Montana Rutledge left the roadway, and struck a culvert and then a mailbox.

Rutledge’s vehicle reentered Switch Road before leaving the other side of the roadway where it struck a tree, overturned, and struck another tree.

Rutledge was pronounced dead at the scene.

The crash occurred at around 2 a.m. Monday just north of Switch Connector Road.