Two Rome High School students have been arrested following a fight at the school on May 3rd.  Brandon Charles Griffin and Jay’Quan Antonio Nelson were arrested and charged with battery in the attack.

Reports said that Griffin assaulted a juvenile student, resulting in visible harm to the victim.

Nelson is accused of encouraging the assault of the juvenile. 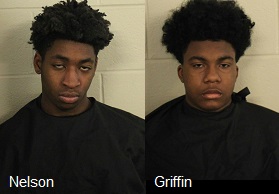