For the second time in less than a year an inmate at the Floyd County Jail, Dominique Makela Adams, 35 of Summerville, is facing additional charges after reports said she attacked a jail officer.  Reports said that Adams hit the officer in the face and arms with her closed fist.

The officer reportedly suffered visible injuries from the attack

Adams is charged with four counts felony obstruction, felony unlawful acts in a penal institution and simple battery against a law enforcement officer.

An inmate at the Floyd County Jail, Dominic Adams, 34 of Summerville, is facing additional charges after she allegedly attacked a sheriff’s deputy.

Reports stated that Adams is accused of kicking an officer on the left leg and scratching another.

Authorities went on to say that all they were physically attempting to restrain her she grabbed a taser out of one of the officers hands.

Adams is now charged with four counts of felony obstruction and 1 counts removal of a weapon from a public official.

Dominique Makela Adams, 34 of Summerville, was arrested on Broad Street in Rome after reports said she snatched a $100 bill and bank information out of a man’s hand.

Reports added that Adams then proceeded to grab the victim’s 10kt diamond necklace, valued at $20,000, and broke it off his neck. 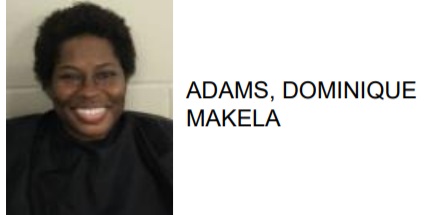