A traffic stop for a window tint violation resulted in the arrest of Eric Dylan Backstrom, 32, and Gina Michelle Morris, 53, both of Rome, this week on various charges including drug possession and stalking.

Reports said that Backstrom had a court order to stay away from Morris, who was a passenger in his vehicle, during the time of the stop.

Police went on to say that a search of the car led officers to locate methamphetamine and a glass smoking pipe containing drug residue.

Police added that Blackstrom was also not wearing his court ordered ankle monitor and was found to have been driving without insurance.

Both are charged with possession of meth and drug related objects.

Backstrom is additionally charged with aggravated stalking, driving without insurance and a window tint violation. 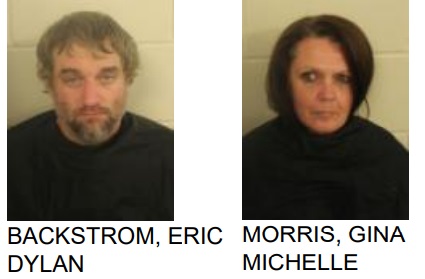