Jessica Nicole Rose, 28 of Cedartown, was jailed in Rome after she allegedly stole and used an elderly person’s bank card, vehicle and gun.

Reports said that back on November 7, 2020 Rose borrowed the victim’s 2000 Chevy Astro van and then refused to give it back for two weeks.  That same day she is also accused of stealing and pawning the victim’s HiPoint JHP firearm.

Then on November 15, 2020 Rose is accused of taking the victim’s SunTrust Bank card and running up $751.28 on various purchases.   The purchases caused the victim’s bank account to be overdrawn by $494.62

Rose is charged with financial transaction card fraud, felony theft by conversion, felony theft by receiving stolen property and felony exploitation and intimidation of the elderly or disabled. 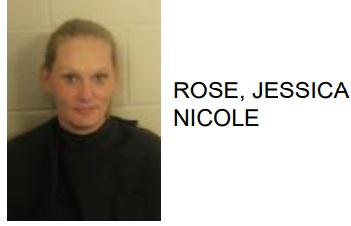