Farica Monet Jupiter, 34 of Rome, was arrested this week after reports said she was found with drugs following a wreck on Shorter Avenue.

Officers said that while responding to the wreck they detected a marijuana odor coming from the vehicle.  A search then resulted in them finding a plastic bag containing marijuana, a digital scale and a pill bottle in the back floor board. 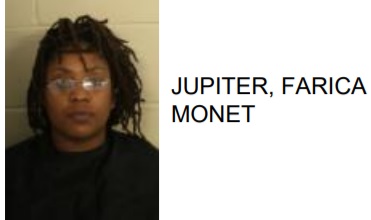