Matthew Charles Monforte, 18 of Calhoun, was arrested in Rome this week after reports said he was found diving while intoxicated after being involved in a wreck that was not his fault.

Reports stated that Monforte was driving on GA53 when he was involved in a wreck that was not cited as his fault.

Police added that the level of ethanol in his blood after three hours of the wreck was .109 grams/deciliter.  The legal limit for someone above the age of 21 is .02 grams/deciliter.

The wreck was back on March 6th of this year on GA 53 between Shannon Circle and Shannon Road.

Monforte is charged with DUI. 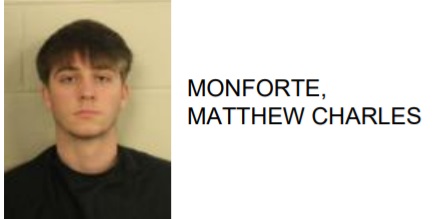