The Rome Floyd Metro Drug Task Force arrested two men, Jacob Mitchell Carter, 27 of Lilburn, and Thomas Scott Davis, 62 of Monroe, this week after the execution of a search warrant at the intersection of Highway 27 and old Summerville Road.

Reports stated that officers found the men to be in possession of marijuana, oxycodone tablets and amphetamine tablets that were not in their original container, as well as grinders and smoking devices.

Davis is charged with possession of marijuana, two counts possession of a schedule II controlled substance and drugs not in original container. 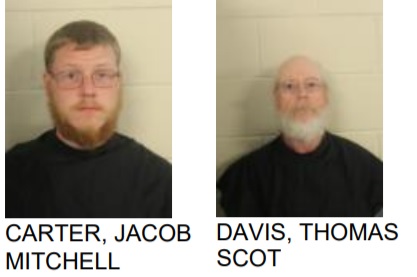