Kyle Taylor Sensing, 33 of Aragon, was arrested this week after reports said he stole a woman’s car and then was found driving it in Rome.

Officers stated that after stealing the car, which belonged to a 56 year-old woman, he was located near the Dollar General on Dean Avenue.

Sensing is charged with theft by taking a motor vehicle, following too closely and driving on a  suspended license. 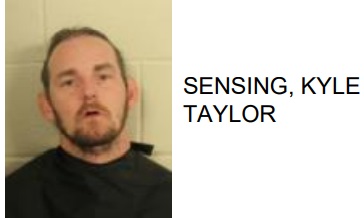