Eric Christian Byars Sr, 38 of Rome, was arrested this week when reports said he led police on a chase after selling heroin to an undercover informant.

Officers stated that they located Byars this week on Sunset Drive and attempted a traffic stop. However, reports added Byars ignored officers and attempted to speed away.

After finally coming to a stop at the intersection of Dodd Blvd and Sunset Drive he allegedly exited the vehicle and attempted to flee on foot.

A k9 officer was called on scene to help with the search.  During the search K9 officer Baro recovered three plastic baggies on the ground where Byars had been running.  Close to 21 grams of marijuana was recovered in smaller bags that had been placed in the larger bags.  Officers added that they also recovered 16 grams of suspected crack cocaine that was placed in small bags.

A witness also told police that they observed Byars taking items from a small black box prior to exiting the car.  A small black digital scale was found in the box. 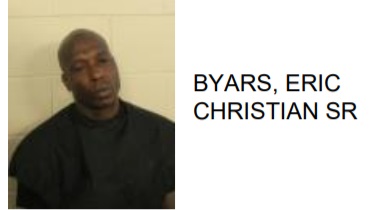