Amy Carol Cothran, 49 of Lindale, was arrested this week after report said she attempted to hide out a wanted fugitive at her home on Marion Dairy Road.

Reports said that Cochran provided information to police that allowed Scotty Craig to evade being captured.  She then allegedly harbored him and kept constant communication in an effort to keep police from finding him.

Cothran is charged with hindering the apprehension of a criminal. 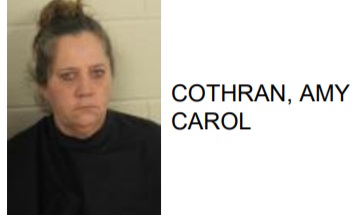