A Rome businessman, Quincy Fluker, was sentenced to 20 years in prison after being found guilty of shooting another man over his ex-wife.

During the trial, Fluker’s attorneys argued that he acted in self defense. Fluker maintained during sentencing that he was justified for his actions.

Judge Sparks sentenced Fluker to 25 years, to serve 20 in prison, as well as a $10,000 fine and restitution in order to pay for Martin’s medical bills.

A Rome businessman, Quincy Jamar Fluker, 33, was found guilty this week of shooting a man who attempted to stop him from attacking his ex-wife.

Reports said that Fluker shot Darrius Martin in the stomach when he attempted to intervene in a domestic altercation Fluker and his ex-wife in August 2019.

Fluker was convicted of aggravated assault, home invasion, burglary, aggravated battery, simple battery and possession of a firearm during the commission of a crime.

A Rome business man, Quincy Jamar Fluker, 32, was arrested this week after reports said he shot another man in the stomach following an altercation with his ex-wife.

At approximately 11:04 am on August 28, 2019 Rome Police Officers responded to a report of a domestic altercation with reported shots fired. The location was 232 South Broad Street. On arrival officers learned that a physical domestic altercation had occurred between the suspect, Quincy Jamar Fluker, and his ex-wife.

Darrius Martin, age 29, was also at the location and observed Fluker assaulting the female. Mr. Martin tried to intervene in the assault when Fluker shot him twice in the abdomen.

Fluker left the scene prior to officer’s arrival. Fluker is 32 years old with a South Broad Street address. There are active warrants for Fluker for Aggravated Assault with other charges pending.

Mr. Martin was transported to a local hospital and was taken to surgery for at least two gunshot wounds.

Fluker is charged with aggravated assault. 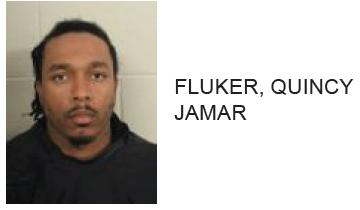