A teenager arrested earlier this week in connection with multiple car break-ins in Cartersville is also facing charges in Floyd County.

According to the arrest warrant, 17-year old Dakota Lee Simmons led a Floyd County Police officer on a pursuit back on March 18 in the area of Georgia Loop 1 and Calhoun Road.

Simmons stopped his vehicle after approximately one mile, jumped out, and fled on foot.

Police had attempted to stop Simmons for going 85 in a 55 mile per hour zone.

He is charged with fleeing or attempting to elude, obstruction of officers, speeding, and driving without a license.

Cartersville police arrested two teenage boys, Dakota Simmons, 17, and a 15 year-old juvenile, this week for allegedly breaking into numerous vehicles in the city.

Reports said that last Sunday, CPD was notified of the break-in’s.  On Monday, CPD used surveillance footage from several of the victim’s homes to identify the suspects.

While taking them into custody several of the stolen items were found.

Both are charged with 14 counts of entering an automobile to commit a theft or felony. 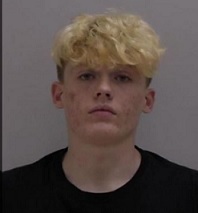