Jonathan Matthew Lira, 27 of Rome, was arrested this week after reports said he met up with a woman who had a protective order against him and then proceeded to attack her during a verbal altercation.

Reports said that Lira grabbed the woman by the head and began to strike her in the face.

A small child witnessed the attack, which occurred on Elizabeth Street last week.

Lira is charged with battery, simple battery, cruelty to children in the third degree, aggravated stalking, and probation violation.

Jonathan Matthew Lira, 26 of Rome, was arrested this week after reports said he violated a protection order when he went to a home and began to curse and swear in front of a 5 and 12 year-old child.

Reports added that when police arrived he was found in possession of marijuana.

Lira is charged with possession of marijuana, disorderly conduct and aggravated stalking.

Jonathan Matthew Lira, 25 of Rome,  was arrested this week after reports said he hit and then dragged a pregnant woman down the road.

Reports said that the victim was 7 months pregnant

Lira is charged with battery. 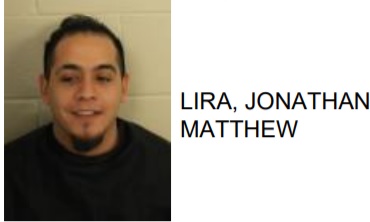