Quinton Jwaun Allen-Stafford, 20 of Rome, was arrested on a drug charge after police said he nearly caused a vehicle accident at the intersection of North 2nd Avenue and Turner McCall Blvd.

Reports stated that Allen-Stafford failed to yield the right of way and turned left in front of on-coming traffic.

When officers pulled him over they allegedly spotted a bag of THC candy in the passenger seat.

Allen-Stafford is charged with failure to yield the right of way and felony possession of THC oil. 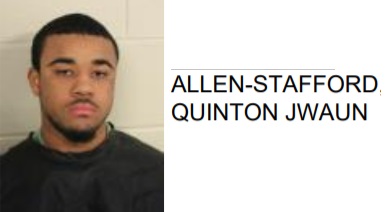