A former practice manager at the West Rome Animal Clinic, Meleah Beth Landers, pleaded guilty on Monday to embezzling more than $250,000 over the course of seven years.

After her guilty plea, her attorney Brian McWhorter requested the sentencing be moved back a couple of weeks so that she “can take care of a few things”.

Landers’ other attorney, Minerva Blanchette, argued the separate civil lawsuit filed by the clinic against Landers was likely to come to a settlement soon. That would clear up the restitution issue for sentencing purposes.

Floyd County Superior Court Judge John Niedrach did not indicate whether or not Landers would serve prison time, but the charges she faces carry a maximum sentence of 20 years.

Landers, entered a nonnegotiated guilty plea to the six counts of theft

The former practice manager for West Rome Animal Clinic, Meleah Beth Landers, 40,  was jailed this week after being accused of stealing over $257,000 from her employer.

Reports said that the alleged thefts began back in 2010 and continue until October of this year.

Warrants state that  she violated the fiduciary obligation of her position by taking the money.

According to reports, Dr. Dan Pate, a veterinarian and owner of the clinic, said that an investigation was launched due to a “significant” amount of money being unaccounted for.  This came after a drug company called and told him that his clinic owed an excess of $100,000 in September.

Landers is charged with felony theft by taking by fiduciary. 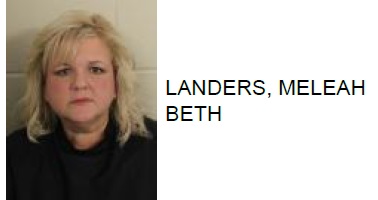