Former Coosa Valley News contributor Regan Lester, 40 of Ponte Vedra Beach, Florida, (formally of Rome) has been arrested and charged with DUI and vehicular homicide after killing an 82 year-old woman.

The wreck occurred last February 17 on State Road A1A. According to reports, a North Carolina man was driving a Toyota Prius on A1A when he attempted to turn left on L’Atrium Drive.  Regan, driving her Lexus RX 350, was allegedly driving at a high rate of speed when she struck the passenger side of the Prius.  A passenger of the car, Saarita May-Sparrow, 82, died at the scene.  The driver was taken to a local hospital with critical injuries.

Lester was also taken to a hospital with minor injuries.

A third car, a Toyota Corolla, was hit by flying debris, but the driver was not injured.

Investigators said that Lester was intoxicated at the time of the crash.

Reports said that Lester was booked last week in the St. Johns County Jail and charged with DUI causing serious bodily injury and three counts of DUI with property damage. 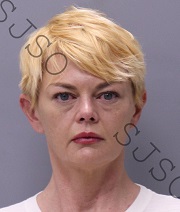