Ashley Nichole McNeely, 17 of Rome, was arrested this week after reports said she went after another person with a knife following a traffic wreck on Riverside Parkway.

Reports stated that McNeely pulled out the knife and went toward another woman with the purpose of terrorizing her.

McNeely is charged with terroristic threats and acts. 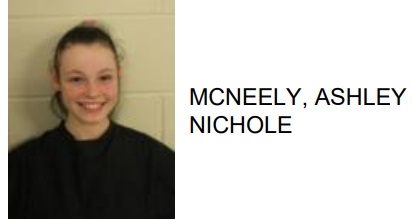