Joshua Nathaniel Danford, 28 of Rome, was arrested over the weekend after reports said he threatened to kill a man as he pointed a gun at him after striking him numerous times.

Reports said that Danford then proceeded to take the victim’s cell phone, air pods and $80 in cash.

Police went on to say that Danford used a cell phone to warn a wanted person that police were looking for her.

Danford is charged with aggravated assault, strong arm robbery, possession of meth, possession of drug related objects, terroristic threats and acts, hindering the apprehension of a criminal, giving false information to police and failure to appear.

Danford was also joined by 29 year-old Dalton Lee Godfrey of Rome in the beatdown and robbery.  He was taken into custody late last week. 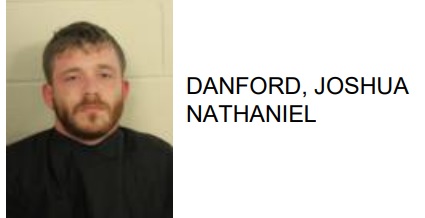 Amber Brock Danford, 28 of Rome, was also arrested for tipping off the wanted woman.  She is charged with hindering the apprehension of a criminal.