Ethan Dakota Cresie, 25 of Rome, was arrested this week after reports said he assaulted a woman with a knife.

Reports stated that Cresie held the knife toward the victim and made a statement about wanting the victim to get out of the room as she was trying to get her child.

The incident was recorded on video and occurred at the Pine Crest motel on Martha Berry Blvd.

Cresie is charged with simple assault. 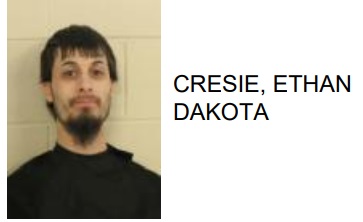