James Michael Taylor, 33 of Rockmart, was arrested this week after a traffic stop for driving under the influence led police to find numerous substances.

Reports added that after being stopped for crossing a double line on Rockmart Highway at Saddle Trail a search led officers to find a pill bottle containing a white power like substance that was suspected to be cocaine.  Officers also allegedly located a pill bottle containing an unknown substance that was a white and blue rock which is believed to be a counterfeit drug. 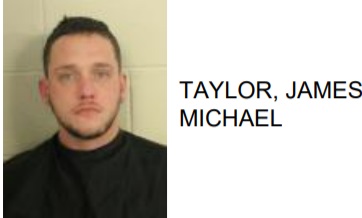