A pair of Romans, Jarrod Cole Duncan, 38, and Carolyn Annette Duncan, 61, were arrested at their home on Morrison Campground Road after attempting to prevent deputies from making an arrest.

Reports said that Carolyn attempted to hide Jarrod in a bedroom as officers was looking to serve a warrant. Police said that he violated a conditional bond by going to the residence on Jan. 16 and violated his 7 p.m. to 7 a.m. curfew as well.

Reports said that Carolyn initially refused to open the door for the deputies.

Carolyn Duncan is charged with felony hindering apprehension of criminal and three counts of obstruction. 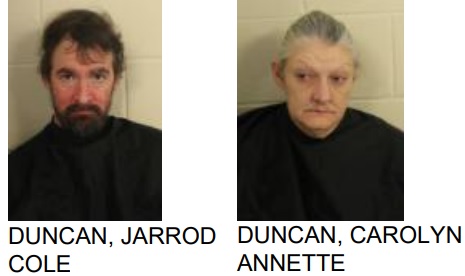