Faheem Tyreek El-Amin, 24 of Rome, was arrested this week after reports said he was found with drugs and a gun following an incident that saw a bullet go through his apartment floor and into the residence below.

Reports said that when officers arrived they discovered that El-Amin was a convicted felon and not allowed to possess a weapon.  They also observed the bullet hole in his floor.  A search then led officers to recover multiple bags of marijuana that was sitting next to a digital scale.   They also found multiple ecstasy pills and a firearm. 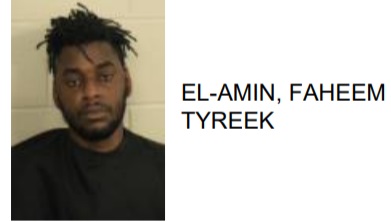