Trevus Jamaahl Baugh, 34 of Cartersville, was jailed over the weekend for his role in the vehicular death of 42-year-old Shauna D’Agostino of Euharlee.

According to the Georgia State Patrol, Baugh was driving a black 2016 Hyundai Elantra east on Euharlee Road in the westbound lane.

Shauna’s husband, Dominic D’Agostino, was driving a 2011 Toyota Sienna west on Euharlee Road in the westbound lane when the Elantra struck the Sienna on the front right area with its front tire.

The incident occurred around 10:15 Saturday morning.

Debris from that crash damaged the front left area of a 2001 Chevrolet Silverado driven by 21-year-old Christopher Cassar of Emerson. He was driving westbound on Euharlee Road in the westbound lane.

The impact area was in the westbound lane of Euharlee Road, about 1/10th of a mile east of Topridge Drive. It was determined based on gouge marks on the roadway, tire marks, debris on the street and surrounding area, and statements from the two westbound drivers

After the crash, Baugh allegedly fled the scene on foot after failing to render aid or provide information.

First responders extricated Shauna, who was transported to Cartersville Medical Center by Metro EMS where she succumbed to her injuries.

She was a social studies teacher at Bartow County College and Career Academy.

Her husband and eight and six-year-old daughters survived the accident.

Trevus Baugh was charged with hit and run resulting in death, homicide by vehicle in the first degree, driving on the wrong side of the roadway, failure to maintain lane, and reckless driving. Baugh also received charges for felony theft by taking and had a misdemeanor theft by shoplifting warrant from December 15th.

WBHF contributed to this report 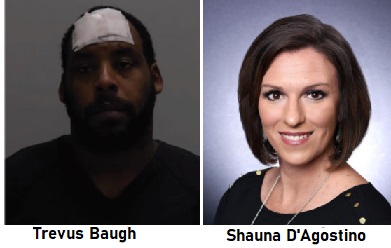