A high speed chase in a stolen car ended on Sunday when a car driven by Jasmine Marie Gonzales, 20 of Lindale, crashed into a home.

Reports said that when officers initiated a traffic stop Gonzales fled the scene, in the process running numerous stop signs in a residential neighborhood at Perkins Street and Calhoun Avenue. She then proceeded to drive at speeds of 101 mph in a 55 zone before ignoring a red light on Calhoun Ave at Ga 1 loop.

The chase continued on Calhoun Road where she crossed over double lines before turning on East Hermitage Road.

Police stated that Gonzalez then ran the vehicle into the home, causing over $500 in damages.

She is accused of tying to hide the identity of the stolen car by changing out its license plate and using black and blue spray paint to cover the silver color.

A search of the car led police to recover a cigar wrapper containing suspected marijuana, a plastic baggie containing methamphetamine, a digital scale, syringe, and three white oval pills believed to be Alprazolam.

A passenger in the car, Joseph William Wells Tapp, 27 of Rome, was also taken into custody.

Gonzales is additionally charged with attempting to elude police, two stop sign violations, speeding, failure to obey traffic control devices, failure to maintain lane, failure to use turn signal, concealing the identity of a motor vehicle, an additional count of criminal damage to property in the 2nd degree, possession of a controlled substance and drugs not in original container. 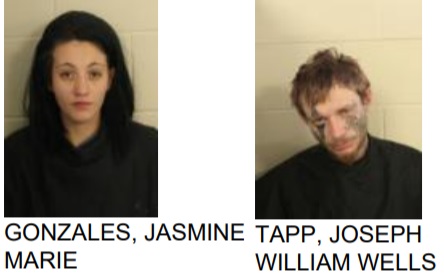