Joseph Shane Gladney, 46 of Silver Creek, was arrested for the second time in hours this week after reports said he threatened a woman at Lawrence Plantation.

Reports said that that after bonding out of jail he returned to the location of his last arrest, Lawrence Plantation, and threatened the manager.  Reports said that Gladney told the manager, “you mother fu**** bi***, fu** you”.  He added, “I know who you are (report whited out) and you are done. I got your ass. I’m coming for you, you whiny bit**”.

Gladney then attempted to approach the victim. However, she was able to drive away before any violence was committed.

Gladney is charged with terroristic threats and acts.

Joseph Shane Gladney, 46 of Silver Creek, was arrested this week after reports said he cursed at and acted aggressive toward a police officer who asked him to “tone down his behavior”.

Reports said that Gladney was allegedly acting disorderly when police arrived to a location on Winding Road.  The officer said that Gladney acted in a aggressive and tumultuous manner when he asked him to calm down.

Reports added that when officers began to take Gladney into custody he began to resist officers and not place his hands behind his back.

Gladney is charged with disorderly conduct and obstruction. 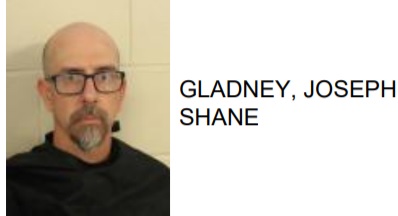