Damion Malik Frazier, 19 of Rome, was arrested this week after reports said he discharged a stolen semi automatic handgun while placing others in danger of injury.

Reports added that he was also found with marijuana and a drug scale. Officers went on to say that Frazier attempted to discard the marijuana by throwing it on the ground.

Frazier is charged with possession of marijuana, tampering with evidence, possession of drug related objects, carrying a concealed weapon without a license, theft by receiving stolen property, reckless conduct and failure to appear. 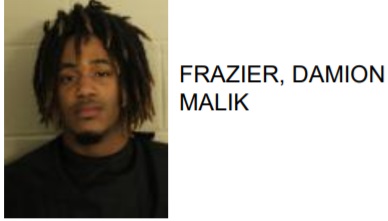