An inmate at the Floyd County Jail, Branton Kaden Hughes, 23 of Rome, is facing additional charges after he allegedly attacked two jail officers.

Reports said that Hughes hit two officers while they were performing their daily duties.

Hughes is now charged with two counts battery on a law enforcement officer, two counts obstruction, and unlawful violence in a penal institution.

Branton Kaden Hughes, 23 of Rome, was arrested this week after reports said he kicked the door to his girlfriends home down and proceeded to hit her in the face.

Reports added that Hughes broke the victim’s glasses and left injury marks to her face.

Hughes committed $400 in damages to the home. 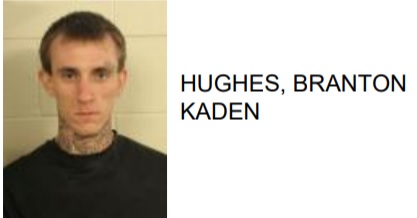