Gordon County deputy sheriffs on patrol in the vicinity of County Line Road and Folsom Road in Sonoraville this week saw a Ford Mustang travelling on County Line Road near the Bartow/Gordon County line which fit the description of a vehicle which was believed to be involved in drug trafficking, driven by an individual wanted pursuant to a number of outstanding warrants.

This same automobile was also believed to have fled from deputies in the same area last week. This car did not stop when deputies tried to pull it over and a short pursuit ensued. Other deputies deployed ‘stop-sticks‘ (devices designed to deflate the tires of a fleeing automobile) ahead of the fleeing car which punctured the suspect’s tires as the chase continued on Folsom Road.

The suspect vehicle came to a stop near the intersection with Yarborough Mill Road after he struck a Sheriff’s Office automobile. After coming to a stop, deputies arrested the driver, identified as one Joshua Ray Hall, age 37 of 1130 Old Boone Ford Road, Fairmount, as well as the passenger, identified as one Madison Montana Young, age 20, of  1110 Old Boone Ford Road, Fairmount. An examination of the automobile revealed that it had recently been painted from a bright blue (as was observed in a previous pursuit) to black in an obvious, but ultimately unsuccessful ruse to evade arrest.

A search of the car’s interior revealed a large amount of methamphetamine, drug related objects, and empty spray paint cans. Both defendants were taken to the county jail where they will face charges of drug trafficking and other drug-related offenses. Hall will face additional traffic related charges, as well as outstanding warrants from previous offenses. 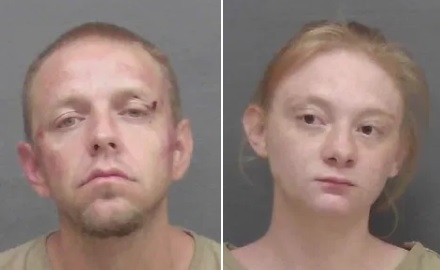