Jody Shane Parr, 46 of Rome, was arrested this week after he allegedly beat a 38 year-old woman in the face and later attempted to injure a nurse.

Reports said that back on July 18 Parr allegedly hit the woman multiple times in the face and neck, leaving visible marks and injury.  Parr then held the victim down on a bed while shoving her face and holding her phone in an effort to prevent her from dialing 911. Parr then used the phone to scrape the woman’s forehead, leaving a visible mark.

He is also accused of breaking a car windshield, a bedroom door, and a door frame. Damages to the home totaled over several hundred dollars.

That incident occurred on Bollen Court.

Then on July 25, after being booked into the Floyd County Jail he is accused of throwing a chair at medical staff, which placed the nurse in fear of her safety.  Parr proceeded to fight with officers, even attempting to place a deputy in a choke hold. 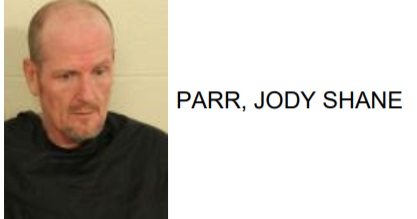