Theresa Lynn Duffey, 57 of 1201 Martha Berry Blvd Room 127 in Rome, was arrested this week after reports said she preformed sexual activities for money.

Reports said that officers located her near Kroger on Turner McCall Blvd, in which she had been previously banned from.   During a search police said they found her in possession of a wad of cash, in which she told police she didn’t get it from panhandling, rather performing sexual activities.

Duffey is charged with prostitution and criminal trespass.

A Rome woman with a history of lies and schemes in order to steal money has been arrested again. Theresa Lynn Duffy, 57 of Rome, was arrested in the Kroger parking lot on Turner McCall Blvd after asking people for money.

Duffy is charged with solicitation and criminal trespass.

Theresa Lynn Duffey, 55 of Rome, was arrested this week after reports said she lied in order to avoid being arrested.

Reports said that Duffey gave false statements to police about concealing a person’s location who was reported missing.

She also is accused of taking $42 from 3 juveniles under false pretenses.

In addition, Duffey is accused of exploiting an elderly man when she portrayed herself as a “care taker” in order to obtain finances though false pretenses.  She also has been allegedly keeping the 79 year-old victim away from his home, depriving him of essential medical services.

Duffey is charged with exploitation of the elderly, theft by deception, and false statements and writings. 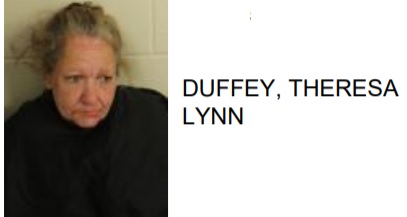