Jamie Leonard Cole, 45 of Rome, was arrested this week after polices said they found him illegally in possession of 28 bottles of prescription medication.

Reports said that the medications were prescribed to another person.

While being questioned officers said that Cole gave officers a fake name and date of birth.

Cole is charged with drugs not in original container, distribution of a dangerous drug, giving false information to police, probation violation and being a fugitive of justice. 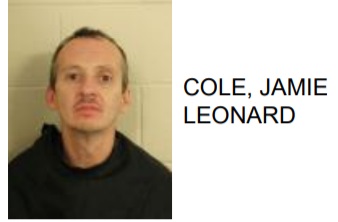