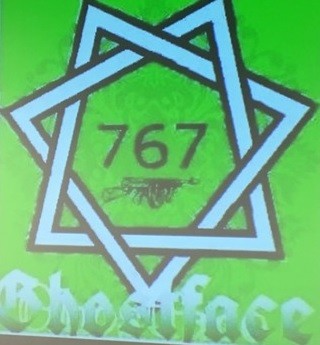 The notorious Ghostface Gang has been in the news a lot this year.  Georgia prison officials are tight-lipped about the gang, but law enforcement elsewhere in the state say that the white supremacist, prison-based gang is quite active – both in and out of the Georgia prison system.

In a separate incident, a Ghost Face member allegedly fired three shots at a Cobb County police officer early this month. The heavily-tattooed Kevin Scott Sosebee, 27, who has “Ghost Face” inked across his forehead, was later found in Carroll County after leading police on a chase. Sosebee was charged with aggravated assault and possession of a firearm.

In June, another Ghost Face member allegedly shot and killed two correctional officers, according to police. While on a state prison bus, two Georgia inmates killed the officers before fleeing, launching a massive manhunt that lasted 60 hours, according to investigators. Sgt. Christopher Monica, 42, and Sgt. Curtis Billue, 58, both died in Putnam County.

The alleged killers, Ricky Dubose and Donnie Russell Rowe, traveled from Putnam County to Tennessee, where both were arrested. Rowe is from Lewisburg, Tenn., about 20 miles from where he was located. Dubose is believed to be a member of the Ghost Face Gangsters. Dubose and Rowe each could get the death penalty if convicted.

According to the Atlanta Journal – Constitution, The Georgia Department of Corrections declined to discuss the gang, and the GBI doesn’t have a gang unit devoted to monitoring their activity. “Our agency does not provide specific or internal details about gangs within our system,” a spokeswoman for the Georgia Department of Corrections said in an email to The Atlanta Journal-Constitution. “We are aware that we have gangs within our system and we have procedures in place to manage them on a day to day basis.”

According to the Anti-Defamation League, there are at least 100 white supremacist prison gangs operating in the U.S., and Georgia is home to at least three, including the Ghost Face Gangsters. The group originated in California in the 1970s, according to the ADL, but an original founding member started the Georgia group in 1998.